The Importance of Detecting Frame Damage

It may surprise you to know that any frame damage on a vehicle is irreversible! Although a damaged frame can be pulled back to its original dimensions, once the structural integrity of any frame member has been compromised the character of the metal is forever changed. This is so important to understand because it is literally the difference between life or death in many cases. To illustrate this, a vehicle’s frame is often compared to an aluminum soda can. When the can is new and undamaged it is strong and hard to crush but if the can was crushed, even slightly, and then pulled back to it’s original shape it has now been severely weakened and will then crush easily. The same is true with automobile frames. But that’s just the beginning of the story!

All modern automobile body and frame members are designed with crumple zones. Crumple zones are a design feature which allows energy to be absorbed during a crash. They are engineered weaknesses in the frame that let the designers control the way a frame collapses during impact. The idea is to have the frame and body panels fold up in a pre-determined sequence absorbing energy while the rigid passenger compartment stays intact protecting the occupants. And it really works! The U.S. Insurance Institute of Highway Safety crashed a 2009 Chevy Malibu head-on with a much heavier 1959 Chevy Bel Air. In this safety comparison the 2009 Malibu’s design won dramatically over the Bel Air’s due to the rigid passenger compartment protected by front crumple zones. 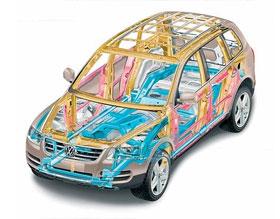 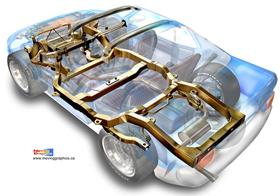 Here’s the bad news. Once the crumple zones have been damaged and pulled back out they no longer can be predictable as to how they will collapse during the next impact. Remember our soda can. Even the engineers who designed these crumple zones cannot predict the outcome of a second time around. But one thing is clear. The crumple zones will likely collapse much faster thereby absorbing far less energy resulting in increased injury to the occupants. This is why it can be a matter of life and death.

Unfortunately, the story doesn’t end there. Air bag timing is affected by an automobile’s compromised frame integrity. Air bag timing is calculated by the vehicles structure based on when the frame was new. If the crumple zones were damaged and then pulled back out after an accident they will likely collapse much faster next time thereby delaying air bag deployment. So it’s a double hit. Not only is the impact energy not managed but the air bag timing is compromised.

All of this danger can easily be avoided with an expert body and frame inspection. Most auto mechanics are not qualified to do this type of structural inspection. Specialized training and experience are required. Not every accident compromises safety but only a qualified inspector can make that determination.